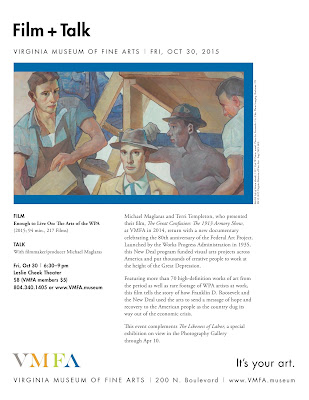 Michael Maglaras and Terri Templeton, who presented their film, The Great Confusion: The 1913 Armory Show, at the Virginia Museum of Fine Arts in 2014, return to the museum with a new documentary celebrating the 80th anniversary of the Federal Art Project:  Enough to Live On: The Arts of the WPA.  Launched by the Works Progress Administration in 1935, this New Deal program funded visual arts projects across America and put thousands of creative people to work at the height of the Great Depression.

Featuring more than 70 high-definition works of art from the period as well as rare footage of WPA artists at work, this film tells the story of how Franklin D. Roosevelt and the New Deal used the arts to send a message of hope and recovery to the American people as the country dug its way out of the economic crisis.

This event complements The Likeness of Labor, a special exhibition on view in the Photography Gallery through Apr 10.