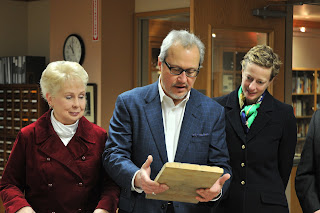 UNIVERSITY PARK, PENNSYLVANIA (February 21, 2011) – In celebration of the art and life of American printmaker and illustrator, Lynd Ward (1905-1985), 217 Films has given a gift to Penn State University Libraries to digitize selected Ward woodcuts and wood engravings.

217 Films will showcase many of these works in a new film titled “O Brother Man: The Art and Life of Lynd Ward.” The documentary, projected for release in December 2011, will feature an interview with the artist’s daughter Robin Ward Savage.

Ward, who illustrated more than 200 books, was among the foremost graphic book artists of 20th-century America, and his books, prints, and artwork are held by major museums and libraries worldwide. His “stories without words,” such as “Song Without Words: A Book of Engravings on Wood” (1930), are precursors to the modern graphic novel and are acknowledged masterpieces of that genre. Between 1929 and 1937, Ward produced six of these books, where the storyline was told entirely through wood engravings. Released recently in a two-volume edition by The Library of America, these books will be the focus of “O Brother Man,” which will highlight Ward’s art as well as his deep personal commitment to social justice and the plight of the working man surrounding the years of the Great Depression.

“We at 217 Films are delighted to contribute to Penn State’s Libraries in support of the digitization of the works of Lynd Ward,” said director Michael Maglaras. “The best way to access works of art in our fast-moving times is to do so online, and with the digitization of even a part of Ward’s vast output, we will help to introduce him to a new audience.”

Barbara I. Dewey, dean of University Libraries and Scholarly Communication at Penn State observes, “While alerting a wider audience to this artist extraordinaire, the documentary will also point to Penn State Libraries’ strong holdings in fine printing, printmaking techniques, children’s books, graphic novels, and original art work for illustrated books. Additionally 217 Films’ gift will help us digitize Ward’s work and expand research opportunities for scholars and students interested in learning more about the creative process, illustration, and the book arts.”

More about 217 Films: 217 Films is an independent film company devoted to the American artistic experience. In 2005, Michael Maglaras and Terri Templeton released their first film “Cleophas and His Own” about the American painter Marsden Hartley’s epic narrative of love and loss. Maglaras both directed and played the role of Hartley in this film. In 2008, they released a second film about Hartley called “Visible Silence: Marsden Hartley, Painter and Poet”—the first-ever documentary on the life of Hartley. In 2010, with their film “John Marin: Let the Paint be Paint!” they established, through the first full-length documentary on this important painter, that Marin was one of the fathers of American modernism. All three films, among other distinctions, have been shown to acclaim at the National Gallery of Art in Washington, D.C.

The “Sacramento Bee” called Michael Maglaras a filmmaker of “Bergman-like gravitas.” His films have been described as “virtuoso filmmaking” (“National Gallery of Art”) “alive and fresh” (“Art New England”) and “elegiac and insightful” (“Naples Daily News”).

More about Penn State University Libraries:
Penn State’s University Libraries, with more than 5.4 million volumes and a robust online presence, constitute a major resource for students, faculty, staff, as well as residents of the Commonwealth of Pennsylvania. The largest research library in Pennsylvania, and with 23 location throughout the state, it is one of four resource libraries that provide service and collections to all other libraries and residents of the Commonwealth. The Lynd Ward Collection is housed at University Park in Rare Books and Manuscripts, The Special Collections Library, 104 Paterno Library. For more information, call 814-865-1793 or go to www.libraries.psu.edu/psul/speccolls/rbm.html