ASHFORD, CONNECTICUT (February 10, 2011) – Connecticut-based independent film makers Michael Maglaras and Terri Templeton of 217 Films announce that their new film project — their fourth film since 2005 — will be on the great American woodcut artist and illustrator Lynd Ward.

The film will be titled “O Brother Man: The Art and Life of Lynd Ward” and is scheduled for release in December 2011. 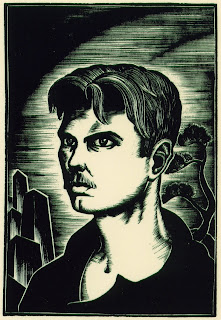 Lynd Ward (1905-1985) was a prolific and accomplished woodcut artist and illustrator of international stature. In addition to illustrating more than 200 books, he is also arguably the father of the American graphic novel. Between 1929 and 1937 he produced six “novels without words” in which the action and storyline are told through wood engravings of intense detail, beauty, and singular inspiration.

“We are delighted that Michael Maglaras and Terri Templeton will tell our father’s story,” said Robin Ward Savage, daughter of Lynd Ward. “My sister Nanda and I will be cooperating fully and happily with them on this film.”

Focusing particular attention on the six “novels without words” which were recently released in a two-volume edition by The Library of America, O Brother Man will highlight not only the beauty and incomparable vision of Lynd Ward, but his deep personal commitment to social justice and the plight of the working man during and after the Great Depression years. 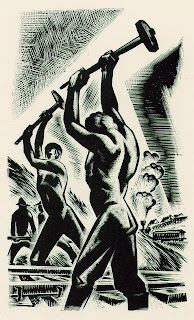 “Lynd Ward was an artist of great gifts and, as a man of conscience, was committed to the portrayal of the human condition. Lynd Ward’s story is the story of America in the 20th century,” said Michael Maglaras, the film’s director. “Not since Goya do we see images of such beauty, pathos, and understanding of our common humanity, as we do in the best of Lynd Ward’s work. As a storyteller, he is without peer.”

Pulitzer Prize winner Art Spiegelman (Maus: A Survivor’s Tale), who was greatly influenced by Ward’s work, has written, “Wordless novels are filled with language, it just resides in the reader’s head rather than on the page.” 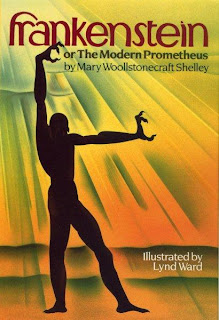 More about 217 Films: 217 Films is an independent film company devoted to the American artistic experience. In 2005, Michael Maglaras and Terri Templeton released their first film “Cleophas and His Own” about the American painter Marsden Hartley’s epic narrative of love and loss. Maglaras both directed and played the role of Hartley in this film. In 2008, they released a second film about Hartley called “Visible Silence: Marsden Hartley, Painter and Poet” – the first-ever documentary on the life of Hartley. In 2010, with their film “John Marin: Let the Paint be Paint!” they established, through the first full-length documentary on this important painter, that Marin was one of the fathers of American modernism. All three films, among other distinctions, have been shown to acclaim at the National Gallery of Art in Washington, D.C.

From Vertigo, 1937. Wood engraving.
Copyright The Estate of Lynd Ward.

Cover illustration for Frankenstein, 1986 edition. Courtesy of Sterling Publishing and Copyright The Estate of Lynd Ward.