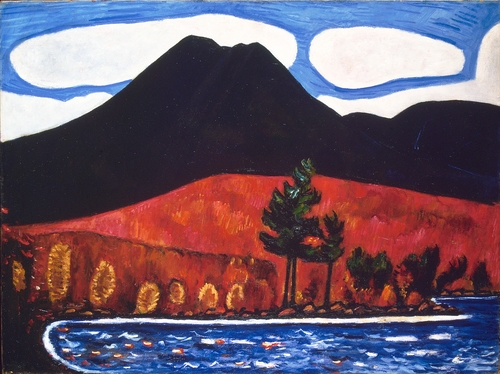 Lynd Ward is the father of the American graphic novel and one of the most prolific book illustrators and printmakers in the history of American art. Featuring more than 150 wood engravings, drawings, and illustrations by this important American artist and storyteller, the 90-minute film brings the creativity of Ward to life and illustrates his mastery of narrative without text. His work chronicles American life in the 20th century, and demonstrates his deep personal commitment to social justice and the plight of the workingman surrounding the years of the Great Depression. Featuring interviews with Ward’s daughter, Robin Ward Savage. Released in 2012.

For a film maker, the artist Lynd Ward is an irresistible subject.

Making films about artists requires good art as well as a good story. Lynd Ward provides both. His story, though, may surprise you.

I’m drawn to the idea of what I call the “anti-artist”…the artist of profound talent, insight and productivity who, despite having these qualities in abundance, does not feel the need to roll through life as if he were the only person around entitled to use the oxygen supply.

The anti-artist produces memorable work, change the face of the art of this time, and provides us, purposefully, with thoughtful commentary about who we are…but may also be sent out to the grocery store (as was the case with Lynd Ward) for another can of cream of mushroom soup when unexpected company arrives for lunch.

The anti-artist should live among us. He must rear his children with our children. He should pay his taxes on time and keep his lawn mowed. He must do this while he creates memorable art of lasting value which transcends his own time and passes down through subsequent generations with almost universal acclaim.

I don’t think this is too much to ask, do you? After all, we have the perfect example in the artist Lynd Ward.

If Lynd’s life seems somehow wonderfully ordinary, his art does pose some challenges for the film maker. First, you can’t show all the work, or even a good part of it. There’s not only too much it…wood engravings, line drawings, brush paintings, mezzotints, lithographs…but the real problem is that so much of it is of such a consistently high quality. What to show? I made a 94-minute film about Lynd Ward. I wrote a film three times that length. What I cut from this film I lament beyond words; but, after all, this film is and should be about the eloquence possible in the very absence of words, so it is fitting that what I cut was another kind of honor I am happy to bestow on this remarkable man.

In 1929, the year in which Lynd’s first wordless novel “Gods’ Man” appeared, he became the chronicler of the terrible Depression years. Some might say this was unintentional. I say it was intentional, for Lynd was a prophet and knew what was coming…and when it arrived, he was profoundly moved by the steep and sudden decline of our American society. He knew the reasons well for the meltdown, and over the next eight years and through five more graphic novels he beat the drum and did what he could to sound the call to arms. He was the son and intellectual heir of the Reverend Harry F. Ward, who spent a lifetime holding up the profit motive to scorn and ridicule. Lynd was a different kind of man than his father; he was more quiet and deliberate in his approach to life, but make no mistake…he was Harry’s boy through and through, and he knew the Depression years were years in which the very essence of our democratic society was under siege and the future of our democratic ideals subject to doubt.

That Lynd Ward earned his left-of-center merit badge at the feet of his father is clear, however Lynd was his own man. I don’t know, in the graphic arts, that we have ever produced in America an artist of similar distinction to Lynd Ward, and I think it is certainly beyond dispute that America has ever produced a story teller whole silence was more profound.

For making a film about Lynd Ward is about silence. In a perfect world, this be a silent film disturbed only by the rustle of pages turning as you moved from image to image at your own pace and in your own private conspiracy with Lynd. But this is a film with film’s limitations. His story needed to be told and words were all I had. We also needed music, since I cannot make a film without good music. Music is the building block of every film I make. With the exception of Bach, I used work by composers of Lynd’s own time. This is fitting. No artist was ever a man of his own time more than Lynd Ward.

When you “read” the six graphic novels, when you consider the illustrations to books of great and lasting as well as now largely forgotten authors, when you see the commercial illustrations which are defined (despite their ephemeral nature) by craftmanship without equal in the American experience, when you see the children’s books with their sometimes darker message than we would expect, and lastly when you see the complex and deeply personal wood engravings of Lynd’s maturity, you see an artist who embodies the concept of the anti-artist. Lynd Ward is not an artist in the Byronic sense of “the artist as hero.” He is “the artist in service to man.”

The first line of the title of this film “O Brother Man” is taken from a poem by John Greenleaf Whittier. The second line of Whittier’s poem is “…fold thy heart to thy brother.” Lynd Ward did this in his art. He speaks to our hearts through the silence of image, and in this silence he gestures toward the path he suggests could improve our common condition and shared human experience. I write “suggests”…for Lynd was well-known for not offering any interpretation of his work. What you saw in the work was up to you. It is less a question of interpretation and more a question of beginning the journey Lynd suggests by simply taking the first step.

Lynd Ward has been a happy film subject for me. I regret that I never knew him. I certainly could have…he only died in 1985. I would gladly have just simply spent time in his company, praising his work and seeking out his wisdom. All the evidence suggests that the reaction to my attention, by this most modest of men, would have been kindness and embarrassment.

The legacy of Lynd Ward is quite simply about the power of imagination and communication. It is also about something else. You go into the studio each day to do a job of work. You do the best you can. You are interrupted for lunch or dinner or for the demands of family…but then, once these demands are satisfied, you go back to it. In Lynd’s case, each time you go back to it, the evidence of genius is sweeter.