University Park, PA (March 25, 2012) — Penn State University Libraries will host the world premiere of 217 Films’ new documentary on Lynd Ward (1905–1985), the father of the American graphic novel and one of the most prolific book illustrators and printmakers in the history of American art, on Friday, April 20, 2:30 p.m., in Foster Auditorium, 102 Paterno Library, University Park. 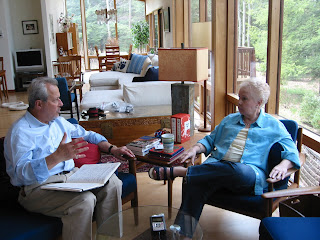 The film, “O Brother Man: The Art and Life of Lynd Ward,” will be introduced by filmmaker Michael Maglaras with Robin Ward Savage, the artist’s daughter, in attendance. Featuring more than 150 wood engravings, drawings, and illustrations by this important American artist and storyteller, the 90-minute film brings the creativity of Ward to life and illustrates his mastery of narrative without text. Ward is best known for his six “novels without words” produced between 1929 and 1937. His work chronicles American life in the 20th century, and demonstrates his deep personal commitment to social justice and the plight of the workingman surrounding the years of the Great Depression.

217 Films is an independent film company founded by Michael Maglaras. The Sacramento Bee newspaper called Maglaras a filmmaker of “Bergman-like gravitas.” His work has been described as “virtuoso filmmaking” (National Gallery of Art), “alive and fresh” (Art New England), and “elegiac and insightful” (Naples Daily News).

A preview of the film and other projects by 217 Films, the work of Maglaras and Terri Templeton, can be viewed at www.two17films.com/viewclips.php.

Follow this link to read more about this film in the New York Times http://www.nytimes.com/2012/03/23/arts/design/motown-piano-restored-postcard-books-film-on-lynd-ward.html?_r=1

Housed at Penn State University Park in the Rare Books and Manuscripts Collection of the Special Collections Library, The Lynd Ward Collection is an example of the University Libraries’ strong holdings in fine printing, printmaking techniques, children’s books, graphic novels, and original artwork for illustrated books. A gift from 217 Films to the Libraries has helped to digitize Ward’s work and expand research opportunities for scholars and students interested in learning more about the creative process, illustration, and the book arts.