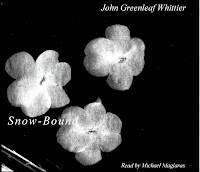 When Michael Maglaras and Terri Templeton are not busy making films, they produce spoken word recordings of works by great American masters.

In honor of the 200th anniversary of the birth of master poet John Greenleaf Whittier, 217 Records released two CD recordings of Whittier’s poetry. All poems are read by Michael Maglaras.

Volume 1 of the Whittier Bicentennial Recording Project is “Snow-Bound” which is dedicated entirely to Whittier’s lyric masterpiece of the same title. Released in 2006, this CD is the first contemporary recording of this epic poem. Listen to an excerpt HERE.

“Snow-Bound” was written in Amesbury, Massachusetts during the summer of 1865. The Civil War had just ended, and the nation was grieving the assassination of President Lincoln and the enormous loss of the soldiers who fought on both sides. Published in February of 1866, “Snow-Bound” was an immediate success. 141 years later, this poetic masterpiece still resonates with as much power as the day it was published.

Volume 2, “Barbara Frietchie & Other Poems,” was released in 2007 and includes 12 of Whittier’s most beloved poems, including “The Pressed Gentian,” “Burning Driftwood,” and “The Barefoot Boy.” All poems are read by Michael Maglaras. Listen to an excerpt from “Barbara Frietchie” HERE.