Skip to content
New Film Announcement: “Enough to Live On: The Art of the WPA”

FOR IMMEDIATE RELEASE
217 Films
CONTACT:
Tami Kennedy  |  207-838-0816 |  [email protected]
New film celebrates the upcoming 80th anniversary of the establishment of the Federal Art Project…the story about how artists, actors, and writers helped lift us out of the Great Depression
ASHFORD, CONNECTICUT (January 22, 2014) – Connecticut-based independent film makers Michael Maglaras and Terri Templeton of 217 Filmsannounce their new film project celebrating the 80th anniversary of  “Federal Project Number One” – the initiative that launched the Federal Art Project in 1935 and put thousands of creative people to work across America. 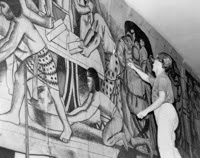 The film is titled “Enough to Live On: The Art of the WPA” and is scheduled for release in February 2015.  As the effects of the Great Depression swept the American nation, with millions out of work and a national sense of despair, the administration of Franklin Delano Roosevelt adopted a novel idea:  to put painters, sculptors, photographers, and writers, as well as actors and dancers, to work, and to place them on the government payroll.
On May 6, 1935, FDR signed Executive Order 7034, creating the Works Progress Administration…and on August 2, 1935, “Federal Project Number One” was created. As some Americans went back to work under the WPA, among those workers included painters as diverse as Mark Rothko, Jackson Pollock, and Marsden Hartley; photographers such as Berenice Abbott; actors such as Orson Welles; and writers such as Saul Bellow and Zora Neale Hurston. The result of paying creative Americans to work at what they did best resulted in an explosion of new art throughout the country and has had a lasting influence, 80 years later, on the way Americans view themselves and view the role of government in the support of the arts and in the furtherance of a civil society.

More about 217 Films:  217 Films is an independent film company devoted to the American artistic experience.  In 2005, Michael Maglaras and Terri Templeton released their first film “Cleophas and His Own” about the American painter Marsden Hartley’s epic narrative of love and loss. Maglaras both directed and played the role of Hartley in this film.  In 2008, they released a second film about Hartley called “Visible Silence:  Marsden Hartley, Painter and Poet” – the first-ever documentary on the life of Hartley. In 2010, with their film “John Marin: Let the Paint be Paint!” they established, through the first full-length documentary on this important painter, that John Marin was one of the fathers of American Modernism. These films, among other distinctions, have been shown to acclaim at the National Gallery of Art in Washington, D.C.

In 2012, they released “O Brother Man: The Art and Life of Lynd Ward.” Their most recent film, “The Great Confusion: The 1913 Armory Show” was released in September 2013 and is currently on tour across the United States.

The Sacramento Bee called Michael Maglaras a film maker of “Bergman-like gravitas.” His films have been described as “virtuoso filmmaking” (National Gallery of Art) “alive and fresh” (Art New England) and “elegiac and insightful” (Naples Daily News).  David Berona, author of “Wordless Books” has said of “O Brother Man” –“This film is stunning.” A recent review in The Dartmouth said of “The Great Confusion” that “Michael Maglaras…brought the drama of the original show back to life.”