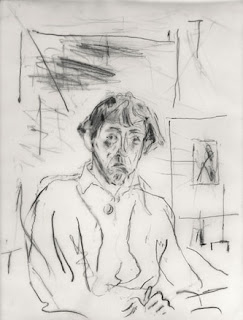 STAMFORD, CONNECTICUT (Feb. 1, 2009) — 217 Films and independent filmmakers Michael Maglaras and Terri Templeton announce their new film about one of the most important painters of the American experience, John Marin.

Scheduled for release in the early winter of 2009, “John Marin: Let the Paint Be Paint!” will employ more than 40 paintings and drawings by this American master painter universally recognized as one of the most productive and influential artistic spirits of the 20th century.

This documentary will highlight Marin’s development, as a man and as an artist…from his early years as he struggled with his own artistic identity as a young man studying architecture, to his first moments of self-discovery as an etcher and painter, and will bring us, finally, at the end of his life and in his 80’s, to the painter and man whose unending quest for the new never ceased, and who served as the creative example to painters as diverse as Willem de Kooning and Jackson Pollock.

“John Marin: Let the Paint Be Paint!” will be written, narrated and directed by Michael Maglaras, and shot at Marin’s summer home on Cape Split in Addison, Maine, where he produced some of his most outstanding and memorable work, as well as in New Jersey near his winter home and studio. Terri Templeton is executive producer of this project. Shooting begins in April, 2009.