Skip to content
May 27: New Britain Museum of American Art

John Marin: Let the Paint be Paint!
A new film by Michael Maglaras 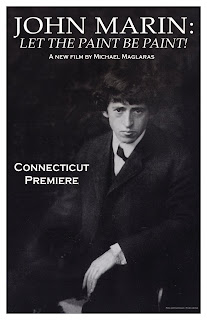 Ashford, Connecticut-based filmmakers Michael Maglaras and Terri Templeton of 217 Films will debut their new documentary John Marin: Let the Paint be Paint! at the New Britain Museum of American Art.

Guests will indulge in extravagent sweets and savories and then preview the Marin documentary, the first full-length documentary about the father of American Modernism.

John Marin: Let the Paint be Paint! tells the story of one of the most important artistic figures of the first half of the 20th century and the undisputed father of American Modernism. Utilizing more than 70 of Marin’s paintings, drawings, and etchings, including, those in the private collection of the Marin estate seldom seen anywhere, filmmaker Michael Maglaras tells the story of Marin’s life, from his beginnings in New Jersey and his early experiments in watercolor, to his days at Cape Split in Down East Maine, where, with his late oils, he established himself as one of the preeminent masters of American art. Written, narrated, and directed by Michael Maglaras of 217 Films. 2009. Not rated. (95 min.)