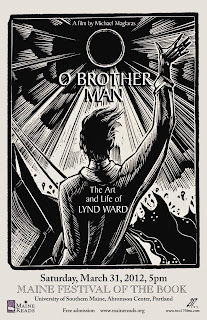 Maine premiere of 217 Films’ new documentary on Lynd Ward, the father of the American graphic novel and one of the most prolific book illustrators and printmakers in the history of American art. Introduced by filmmaker Michael Maglaras, with Robin Ward Savage, the artist’s daughter, in attendance.

View clips from the film at this link.

More About Lynd Ward:
Ward, who illustrated more than 200 books, was among the foremost graphic book artists of 20th-century America, and his books, prints, and artwork are held by major museums and libraries worldwide. His stories without words, such as Song Without Words: A Book of Engravings on Wood (1930), are precursors to the modern graphic novel and are acknowledged masterpieces of that genre. Between 1929 and 1937, Ward produced six of these books, where the storyline was told entirely through wood engravings. Released recently in a two-volume edition by The Library of America, these books will be the focus of O Brother Man, which will highlight Ward’s art as well as his deep personal commitment to social justice and the plight of the working man surrounding the years of the Great Depression.

More About 217 Films:
217 Films is an independent film company founded by Michael Maglaras. The Sacramento Bee called Maglaras a filmmaker of “Bergman-like gravitas.” His work has been described as “virtuoso filmmaking” (National Gallery of Art) “alive and fresh” (Art New England) and “elegiac and insightful” (Naples Daily News).

Directions to the Abromson Center:

From I-295: Take exit 6B (Forest Ave. North) and immediately move to the far left lane on Forest Ave. Turn left at that first stoplight onto Bedford St. After the Skywalk, turn left onto Surrenden St. and into the USM Parking Garage.

From Brighton Avenue: Follow Brighton Ave. towards downtown until it turns into Bedford Street. Turn right onto Surrenden Street before Skywalk and into the USM Parking Garage.