In December, we always think about John Greenleaf Whittier and his masterful poem, “Snow-Bound.”  This essay was written by Michael Maglaras in 2010 and we return to it now in appreciation of Whittier and his lasting contribution to American poetry.  Order the CD recording of this poem at this link.

Maglaras writes:  “I know of no other poet who can seduce the ear like Whittier, and a moment later slam his fist down in front of us, reminding us of how we must do better and why we must not settle for interminable indignities…particularly those perpetrated by men against their brothers.”

John Greenleaf Whittier’s “Snow-Bound” is his signal work of genius. Whittier wrote many poems of unassailable quality…but “Snow-Bound” is without equal among his poems. It is a work of towering imagination and incandescent beauty. “Snow-Bound” also captures, at once, Whittier’s best qualities as a poet and as a man. It is clearly a nostalgic poem. It is, of course, also much more than that. For Whittier’s command of lyricism is no better evidence than in this great masterpiece: a poem intended to tug at our hearts, while calling us vigorously to action. 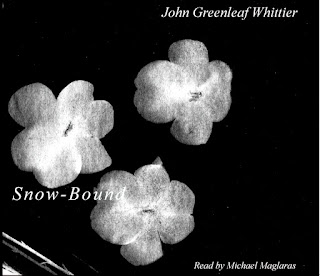 In “Snow-Bound,” Whittier speaks passionately about “the hell of prison torture.” Since that particular kind of hell is still with us 144 years after “Snow-Bound” was written, his work can still resonate on many levels and in many ways. When he began the emotional and intellectual journey that culminated with the publication of “Snow-Bound” in February of 1866, he was still mourning the loss of his sister Elizabeth: the two of them had formed a special bond that was hardly understandable by the outside world. (We have dedicated Volume 2 of the Whittier Bicentennial Recording Project to Elizabeth Whittier’s memory.)

I know of no other poet who can seduce the ear like Whittier, and a moment later slam his fist down in front of us, reminding us of how we must do better and why we must not settle for interminable indignities…particularly those perpetrated by men against their brothers. 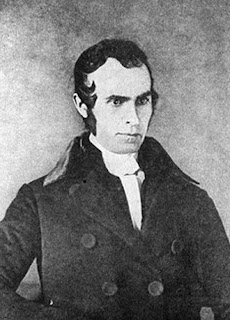 “Snow-Bound” captures a time that we, in the 21st century, only have a hint of understanding. Imagine a two-day blizzard (in the days when we still had two-day blizzards). Imagine a family and their friends brought unexpectedly together, entombed by the snow in a Haverhill, Massachusetts farm house for almost a week, before plows, drawn by teams of oxen, reach them. Imagine a time when a group of persons, forced together by the “shrieking of the mindless wind” in a combination living-dining-and-kitchen area less than 26 feet in length, would have been able to sustain each other, happily, through a week of conversation, fellowship, and mutual understanding…without once having to go “online” to escape boredom. And now, lastly, imagine that experience impressed on the mind of a ten-year-old boy of exceptional talent, sensitiviity, and perception — this young boy growing into a man able, in his late middle age, to invite us to “stretch the hands of memory forth,” so lovingly in “Snow-Bound.”

Whittier’s hands of memory are more than the hands that reach back into the past; they are also the hands that subtly draw the curtain back and reveal simple lives (or, in the case of Harriet Livermore, a not-so-simple life), and show us how self-sufficient people of intelligence and dignity coped with a storm, the likes of which would most probably reduce us, in our own time, to at best, whining, and at worst, hysteria.

In “Snow-Bound,” Whittier’s use of language and image is without peer. It is Whittier at his finest…and Whittier at this finest is without equal in the American experience. On Whittier’s 80th birthday he was presented with a birthday greeting signed by the President and Vice President of the United States, every member of the United States House, Senate, and Supreme Court. Schools closed in his honor. Streets and towns were being named for him while he was still alive.

Tonight, as we celebrate Whittier’s 203rd birthday year, and as you hear “Snow-Bound” read aloud in its entirety (and to hear Whittier read aloud is to take the ultimate joy from his work) and not in some reduced, expurgated edition or performance, I hope you become inspired to take up the cause of Whittier again, so that the depth of his human understanding and the profoundness of his universal message can be passed to a new generation.