Skip to content
Film on the 1913 Armory Show to Screen in Ludlow, Vermont

On Wednesday, July 15 at 7:00pm our film on the 1913 Armory Show will screen at the Mount Holly Town Library in Ludlow, Vermont.  Excerpts from the film can be viewed at this link. 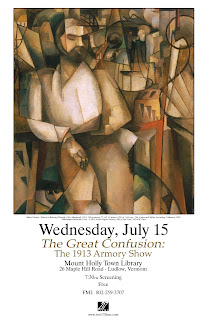 From February 17 until March 15, 1913, thousands of Americans pushed their way through the doors of the 69th Regiment Armory on the east side of New York City while a battle was waging “for or against” Modern Art for the first time.
What they saw would annoy and infuriate some…and captivate, delight, and inspire many.
What resulted from these four weeks of mass exposure to European artists such as Cezanne, Renoir, Van Gogh, and the upstart Marcel Duchamp (with his “Nude Descending a Staircase”), as well as such Americans as Marsden Hartley, John Marin, and Charles Sheeler, changed how Americans came to understand their own times. By entering through the doors of an armory, they had entered through the doors of the Modern Era.
“The Great Confusion:  The 1913 Armory Show”features more than 60 works by American and European painters and sculptors and probes deeply into the history of how the show was organized. It provides fascinating glimpses into the backstage efforts of the American artists Arthur B. Davies, Walter Pach, and Walt Kuhn as they worked tirelessly to bring a new art to a new American audience.