Film examines art and life of Lynd Ward
May 1, 2012
by Steven Herb

Ward, who studied at the National Academy for Graphic Arts in Leipzig, Germany, was inspired by the engravings of Frans Masereel, and their common man subject matter.
Ward’s wood engraving novels and his prints would represent his lifetime search for answers about the condition of humankind and his way of sharing that search with others.

Ward’s work illustrates the labors and issues of the common man. But he never explained his work. His response when anyone asked, “What did you mean by this?” was, “It isn’t what I intended that matters, it is what you see in it that counts.”

Through his training in Leipzig and his exposure to Masereel, Ward was inspired to create “Gods’ Man: A Novel in Woodcuts” (1929), his first graphic novel and the first novel-length story told in wood engravings to be published in the United States.

He would go on to publish five additional novels using wood engraving in the 1930s—“Mad Man’s Drum,” “Wild Pilgrimage,” “Prelude to a Million Years,” “Song without Words” and “Vertigo.” 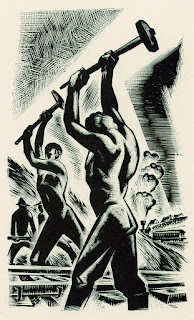 (Image Courtesy of Penn State Library) In the autumn of 2010, the Library of America re-issued the six novels in a two-volume boxed set entitled “Lynd Ward: Six Novels in Woodcuts.”

“Gods’ Man” was published in October. Filmmaker Michael Maglaras who also narrates “O Brother Man” states in the film, “With this book, the first American novel without words, the graphic novel became the province of the subversive where it has happily remained to our own day.”

The film’s overarching premise is that Lynd Ward knew somehow instinctively that his undiluted reality of a world in black and white perfectly suited “an America poised on the precipice of economic and social collapse.”

“O Brother Man” has captured every major facet of Ward’s fascinating life and finds stunning ways to broaden the audience’s appreciation for his work. Maglaras’ remarkable visual juxtaposition of the lead characters in “Gods’ Man” and the 1920 German Expressionist Film, “The Cabinet of Dr. Caligari,” directed by Robert Wiene, demonstrates a clear Expressionist influence on Ward’s art.

The filmmaker’s powerful use of depression-era film clips as segues into the pages of Ward’s graphic novels pulls us into the 1930s and amplifies the novelist’s deep personal commitment to social justice and the plight of the workingman surrounding the years of the Great Depression.

Maglaras used interviews with Ward’s daughter Robin Ward Savage to personalize the film and provide anecdotal punctuation in careful measures. Stories of tapped phones and cruel classmates remind viewers that Lynd Ward’s support for his politically active father and much of his artistic subject matter were brave choices that might have ended his career at any time in the 1940s and 1950s.

Maglaras chose to present the entire 20 wood block graphic novel, “Song without Words” with its frightening exploration of bringing a baby into the world in 1936. The book ends with the new parents thrusting their baby upward in exultation while Lynd and wife May’s actual exploration of that question resulted in Robin’s birth.
And there is the music, some of which the filmmaker chose long before he started the project knowing its connection with Ward’s art would be synchronous. Darius Milhaud’s American jazz-influenced ballets “La Création du Monde” and “L’Homme et son désir” and Lukas Foss’ “Three American Pieces for Violin and Piano” are perfect accompaniments to Ward’s sharp buildings and the curved bodies of Americans on the verge of despair.

Yet there is hope. This is conveyed through the use of Chick Corea’s “Children’s Songs” throughout the film, in Robin Savage’s stories and Maglaras strong narrative.

The film is brought to a powerful conclusion when Ward turns his art toward another time when the common man seemed most at mercy to the corporate man—the Vietnam War.
“[I]n his woodcut novels Ward documented the injustices in the American economic and social system during the Depression era,” wrote Ward scholar David Berona. “Ironically, the social ills Ward displayed in his woodcut novels [80] years ago are evident in today’s culture.”

Michael Maglaras and Terri Templeton have been invited to return to Centre County with their film for the Centennial Celebration of Woody Guthrie the weekend of September 7-9 this fall.

Woody Guthrie, much like Ward, captured the Depression but with song.

“The test is whether the narrative can be understood if the words are eliminated,” Ward was quoted in the film.

It serves as an interesting counterpoint to the Art Spigelman essay in the Library of America-issued set of Ward’s six novels where he writes: “Wordless novels are filled with language, it just resides in the reader’s head.”