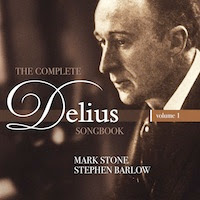 Stone Records’ The Complete Delius Songbook – Volume 1 will be released in the UK on July 18 and is available now on the Stone Records website at this link.

This is the first CD in a two-disc series that will comprise the first ever complete recording of the songs of Frederick Delius (1862-1934) for voice and piano.

Featuring baritone Mark Stone and Stephen Barlow on piano. Produced in association with 217 Records and supported by the Delius Society and the Ireland Trust, the series is being released in time for the 150th anniversary of the composer’s birth.

This first volume, which includes five première recordings, features all Delius’ songs to English and Norwegian texts, the latter being sung in English translation. Delius was fascinated and heavily influenced by Norwegian culture, as is evidenced by the large number of Norwegian poems he chose to set, including the ever popular songs Twilight Fancies and Young Venevil. His English songs are equally as beautiful, although in a very different style; for each country, Delius seemed to adopt a distinct musical language.

The disc’s booklet contains the full texts, together with the original Norwegian poetry and extensive notes for each song. This disc is the result of a long period of research and preparation and is an important first for Delius enthusiasts and a must-hear for anyone interested in English song. 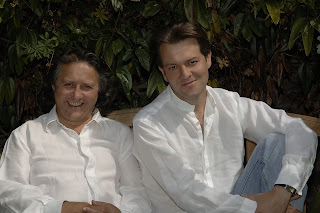 More about Stephen Barlow and Mark Stone: Stone is critically acclaimed for his performances on stage and in concert and his forthcoming engagements include debuts at La Scala, Oper Köln and Deutsche Oper, Berlin as well as return visits to the Royal Opera House, Covent Garden and The Opera Company of Philadelphia. In recital with Barlow, he has been described as “a baritone of extraordinary elegance and unforced expressiveness…versatile in his response to the varying stylistic demands” with Barlow “accompanying his voice with a genuine feeling for tone-colour and shape”.